Is Dr. Strange A Chaos Mage, and If so, why Is He Lying About It? 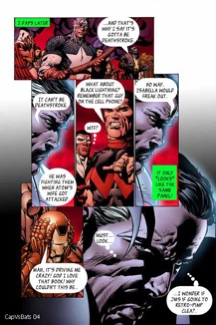 i'm doing something i thought i'd never do, in my blog or anywhere else - commenting on a book i haven't yet read, Avengers 503. This week i'm renewing my pull service (was buying too many comics, dontcha know) because i rarely read anything the week of its release anymore. Now that i'm blogging even occasionally on comics i'll rectify that.

Neilalien posted an interesting rundown of outcry in the blogosphere because Bendis had Doc say "There's no such thing as chaos magic". In as much as i haven't actually seen the book, only the gripes Neilalien linked to, in general i'm not too upset. i like the Scarlet Witch, but agree that Dr. Strange should and must be able to kick her ass. Since i've always liked her, i'm a bit more concerned that she has a serious black eye, AND a body count for some future writer to write around. But it's always a cheap thrill to have a major Doc rescue...too bad for Avengers fans it's in their book.

But about the book..i will read it, but not eagerly. Comic Treadmill addresses the bigger issue of just how ghastly Marvel Comics have become. The panel on this page comes from Avengers Decompressed, CapVsBats' Avengers 503 Preview Parody.

And, to return to Chaos Magick. i DO Chaos. i know others who do Chaos. And nothing Strange does in DSSS 83, or Wanda 'channels' is Chaos. Which is OK, it's Marvel chaos magic, i get that. But the Dr. Strange magic that works best for me is its own system, documented in loving detail in cat yronwode's Lesser Book of the Vishanti. To work in the stories, the magic needs internal consistency. This has been thrown out the window, along with believable characters. i'm not a continuity nut, but if you're serializing characters and stories, you need a 'bible', and when you tweak or change that history there should be a reason more compelling than a deadline. A reason means you know what you're doing, not just vying for attention. That Doc said he used chaos quite a while ago, and now says there's no such thing is really no big deal, but it is symptomatic of larger problems. It's certainly possible to write a comic dealing with real Magick; Alan Moore did it in Promethea, but, hey, Alan MOORE. All i ask from Marvel is humble fantasy narrative that agrees with itself. And these days, that appears to be too much to ask.

The comments to this entry are closed.